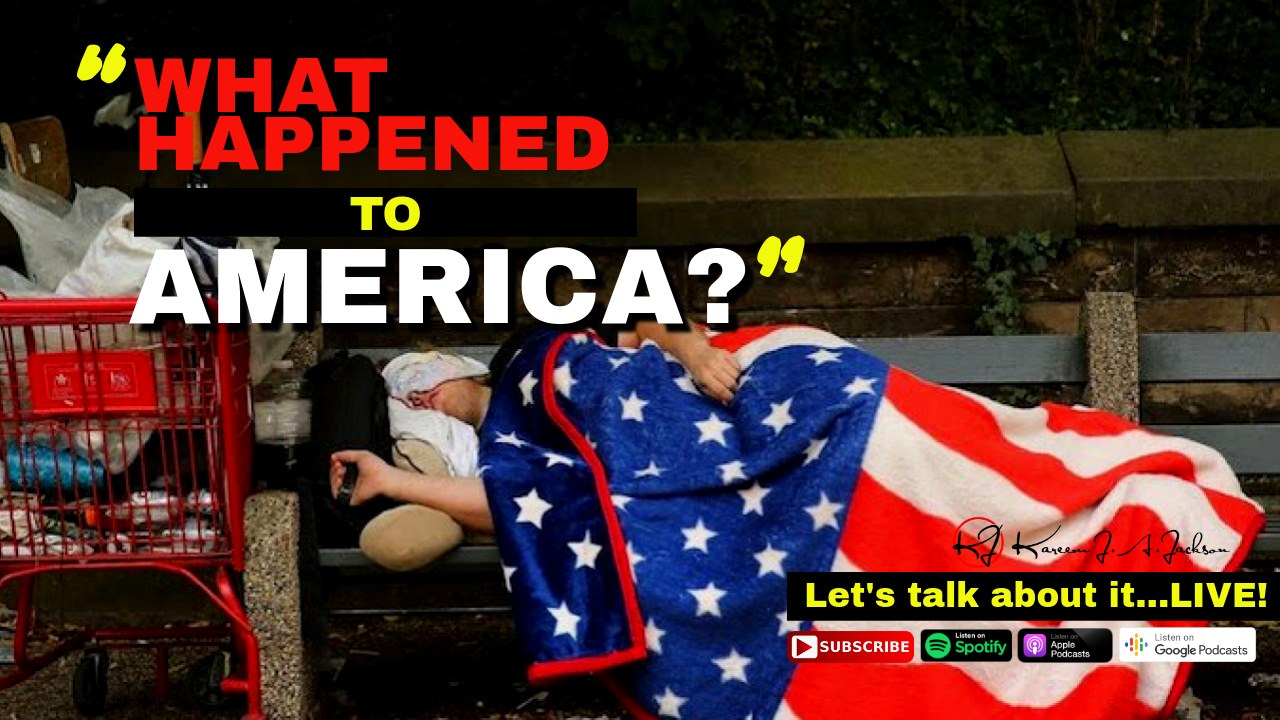 “What happened to America?”

“The sad truth is, ‘racism’ in America is better now than ever before in American history.  It’s just hard to imagine, what our great grandparents endured.”  -Kareem Jackson, Host Minimalist CEO Podcast, LIVE! On The Set, US Executive Publisher & Author.

Black America is in the middle of a rare watershed moment in history; they are celebrating, proud, and are richer now, than ever before in history.

Black Americans, especially entrepreneurs, have discovered ‘the global economy’, wide-acceptance, and love felt towards them around the world.

American media propaganda, ruthlessly promotes the work numbers, working-class wages, and rising unemployment.  In actuality, American entrepreneurship, travel, international-investments, and millionaires are at an all-time high; but it is not because of the President, nor the American economy.  Black Americans use a simple term…

The state of being, when you have learned the inspiring truth of your heritage, and have been enlightened, you can appreciate how far you have truly come and can see the vision of the vast potential of your legacy.

Being “WOKE” affects your entire existence, gives you bountiful pride, opens doors to global entrepreneurship, empowerment, travel, investments, and can be healthier, both mentally, as well as, physically.

We must be grateful.  Never before, has a ‘racist’ President, politicians, celebrities, CEO’s, business owners, and even next-door neighbors been called out, fired, removed, protested, just for being racist.   Not only in America but also, around the world.

Let’s not forget, just a few generations ago, you could hang a Negro from a tree, design, mass print, sell, and profit from a postcard promoting it –legally.

Another Fun Fact:  It hasn’t been that long.  Many of the first black American students, to attend school, play basketball, baseball, football, to attend every public and private school, as well as, Ivy League US Universities, and to drink from public water fountains, are still alive today.

“What happened to America?” is a live-recorded, candid conversation between Kareem Jackson and US Attorney David Youngblood.  They are discussing “6 Concerns Black Americans Have Post COVID-19” and what they think about them.

The richest, and most powerful nation on earth, and the first democracy, can’t even guarantee and election, or unite in the eyes of a pandemic –so how can they lead the Free World?

It is already rumored, that the world will witness the first time in history, when America, “The Land of the Free”, will stall an election.  Something which has happened all around the world, in similarly corrupt nations, and, until now, the United States had been the beacon, as well as, the enforcement, of democracy.

Many believe, the ‘Electoral College’ is steamed in racism, and should be abolished, to save true-democracy.

Racism has also proven to be a cancer, within the democracy, and it has festered into a global distaste or disenchantment with the idea of democracy itself.  Racism is what fuels the defense of nations like Russia, Islam, and China.

Another issue facing ‘democracy’ is the facts and realities of police brutality in the United States.  The massive, lynching, murder, or accidental killing of unarmed black men, coupled with the now obvious second class citizen treatment of black Americans at large, has made America less attractive.

Additionally, this era of the ‘Trump Administration’ has focused a beaming light on the weaknesses of the democratic structure, specifically, to the reality that much of its success is derived from ‘good faith’ and not truly the voting process.

From the reality, that America needed to; and is still needed to, payout out, or give supplemental-income to its citizens and businesses, while people and families in 3rd world countries have not needed such government aid to survive, is a harsh reality check.

Reality is, it is not just due to their tardy realization by American leadership, that the Coronavirus was not a hoax.  As well as, the sad fact that without just 2 months of working, over 40 million American’s face eviction, and even more Americans, in America, right now, did not know how they would feed their families.

All, while, in most ‘3rd world’ or ‘shithole countries’ as Trump has called them, they have had no assistance, no unemployment checks, no bailouts, and they have survived.  Around the globe, poorer nations have simply seized this opportunity to enjoy the time with their families, discovered online shopping, and food delivery, all while they shuttered in place –some up to 6 months now as they were ahead of America.

During this pandemic, many countries have risen to the occasion, helping Americans, and have grown to love and appreciate one another more, during this global pandemic.

What is ‘The American Dream’ in 2020?  I believe that is, the-disconnect in America right now.  There are different dreams now, or ‘alternative facts’ as deemed by the Trump Administration.

The truth is, there are alternative facts, lifestyles, realities, as well as, priorities, and in America, it is tearing the country apart.

For some, the American Dream is outsourced, for others, it is a great job, health benefits, and a home, others dream of entrepreneurship.

Yet about 30% of Americans, who voted for Trump, dream of going back to the past; they see the country as great before, when it was set-up to be the best for whites.

For blacks in America; despite the cinematic personas, bling, and liberation fronts we see, just like most other blockbuster Hollywood movies, their all fiction.

Truth is, when asked, either the lower 80%, who live paycheck-to-paycheck or the upper 20% of black Americans (the ones we see on TV), they all share a common experience.

For black Americans, no matter who they are, including the former US President Obama, Oprah, and the beloved Kobe Bryant, all have expressed, publically, that life, as a black American, in America, can be subconsciously and inherently unhealthy.

Studies have also shown that life for blacks in America is stressful, plagued with systemic racism, low-income, barriers to success, low-self-esteem, poor health, low-quality food, no vacation time, no healthcare, and it is so normal, that none even notice it anymore –it’s just life.

Many black Americans, though they have obtained seemingly massive ‘success’ now, say…

“…it’s hard to not think actually, ‘how much more-successful would I have been IF racism didn’t slow me -and my family- down?”

And, yet, Black Americans, have thrived.

The Value of Black America:

Black American’s are surpassing many of their white American counterparts.  It is common now, to see a much poorer white server in a restaurant, for example, serving a successful black customer.  Whereas, that same black customer’s grandparents could not sit in the restaurant at all –without fear of death by lynching.

‘Black America’ is one of the world’s richest, most powerful, globally sought-after ‘markets’ as both a race and a demographic.  It’s not just about money, it’s about talent and culture as well.

Now the world sees how America rose to global-dominance, the competitive advantage, as well as, the shrewd, fiscal power slavery had in America.

America’s dominance was not just innovation.  Slavery played a key role, as powerful Africans were kidnapped, and human trafficked to the Americas, working and contributing their talents -for free, building the United States for hundreds of years, until subsequently, the 4 million who survived, were finally freed from private slavery plantations in America.

And now, as slaves to the nation…

…the descendants of these 4 million slaves continue contributing, specifically about $4 Trillion USD cash into the US economy every year, and more than $100 Trillion USD annually worth of talent, and direct labor.

Contrarily, the mainstream American media doesn’t talk about the success of ‘Black America’ at large.

But, the international media does talk about it; a lot.  Hence, the historic number in which American’s are getting their US Visas, and the billions of online searches for ‘global opportunities’.

A little perspective:  In 1997, only about 7% of Americans owned a passport, then after 9/11, the laws changed requiring passports to visit countries like Mexico, Hawaii, Canada, and even South America, which earlier only required a valid US ID or Driver’s License.

Around 2017 however, there was a spike, and over 21 million US passports were issued; the highest number ever recorded, but, just 6 million were issued to black Americans.

However now, as more and more countries around the world allocate and target billions of $USD’s toward racism-free, tourism, travel, outsourcing and investments, trade, and relocation campaigns, to attract the power of the black American lifestyle, black passport requests are spiking.

Especially now, as nearly 80% of black Americans surveyed, express that they would be open to, and are seeking information in regards to living, traveling and outsourcing to, and investing in other countries; like Africa, the Philippines, Mexico, Germany, and Canada.  Much like successful whites in America do.

Is it true that on 10% of Americans have passports?: