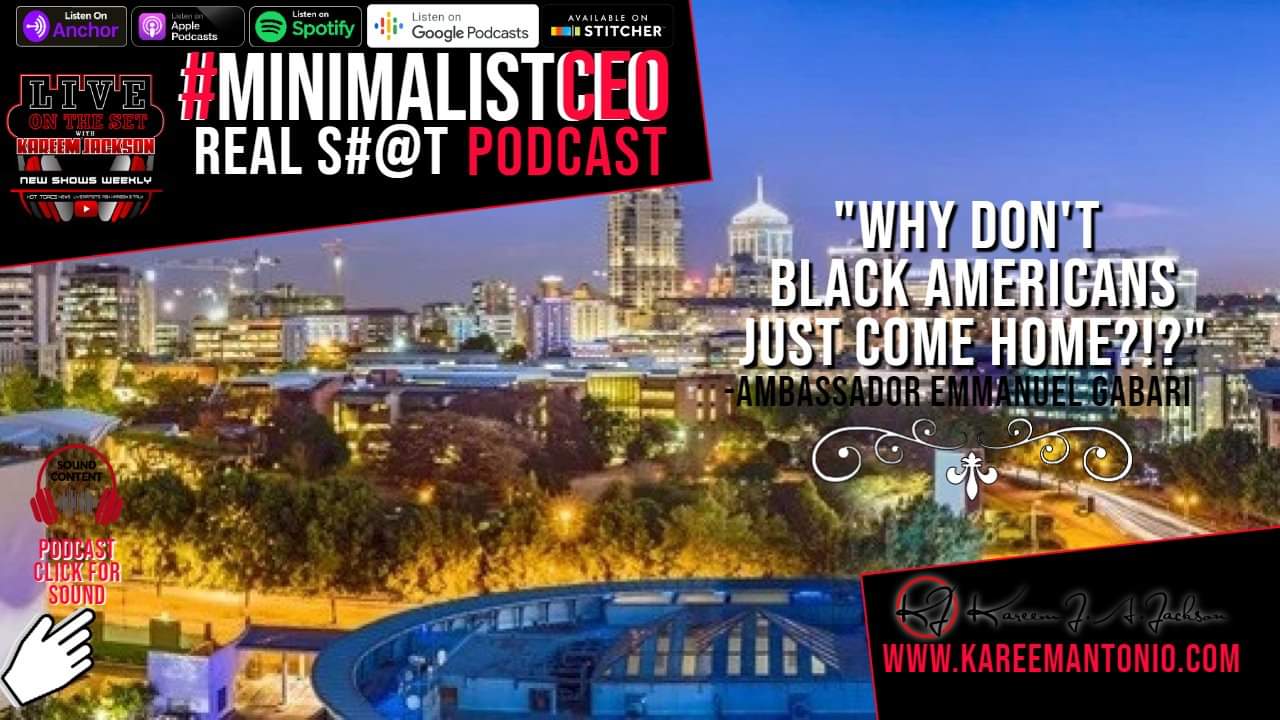 We’re talking about the current state of Black America, and the ways Africa can attract black Americans, former slaves, and the diaspora.

Presented by www.KareemAntonio.com and KA&CO America LLC, an international business development group, focused on getting more black Americans, (as well as wanna-be-entrepreneurs in Africa, and around the world) into entrepreneurship.

We are at a watershed moment in global history, when the rules of yesterday, no longer apply, ‘values’ have been completely re-invented, and the ‘powers that be’ are shifting.

Now, not only black and white Americans are fighting in this 2nd American Civil War; the world have stepped up against the injustices. In America, all nationalities, economic statuses, sexual preferences, and political affiliations have said “Enough is enough…”, and they have taken to the streets.

Presidents and governments around the world, such as the Philippines President Duterte, China, African Nations, and even Canada has spoken out against the treatment of black Americans –in America, and has even questioned why the United States is not held to account in The United Nations, for ‘crimes against humanity’ throughout history.

Many people, do not understand why they/we are protesting. Many focus on the looters and vandals, but, despite the critics –protesting works.

No Negro could play in the NBA, NFL, and the Olympics, if not for a black American protest.
And, without those protests, the NBA, NFL, and The Baseball League, may have gone bankrupt, never becoming the global phenomenon, which it is today.

We (Negros –and other non-white people) couldn’t drink from public water fountains in America (and that means you to Filipinos, Africans (real Africans), Mexicans, and definitely, the Middle East brothers and sisters. You could forget it. If not for a deadly black protest.

We celebrate it now, perhaps, we even take it for granted. However, there would be no Kardashians and their black men, and no OJ Simpson scandal -if not for another deadly black American protest. Marrying, and have sex interracially, as well as gay sex, is a new law, or ‘human right’ or, whatever you want to call it.

They hung Negros (that’s people like me) for that when my grandfather was a boy.

Now, police reform, excessive force laws, many bad cops walking out, the NFL $250 USD commitment to institutional racism (racism…not, negro-ism, it’s for all of us), NASCAR banned the confederate flag, and stood with their one Negro driver! That is all because of protesting.

In addition, the world now sees the trillions of $USD’s that black Americans, create, earn –and subsequently spend, every single year. Countries all over the world are promoting ‘racism-free’ tourism, investment opportunities, FREE Visas, NO Visas, massive ‘50 to 100-times US Dollar Earnings’ conversions, land, and more to attract not just our money, but, they realize black American’s built and dominate, much of the US economy.

One of those countries is Nigeria, actually the entire continent of Africa is targeting getting their long lost human-trafficked family back. And, places like Ghana, The Gambia, and Nigeria are stepping up their games and directly marketing to black Americans.

Technology is nearly at a point where wealthy Africans, can also ‘Reverse Search’ for their family.

My guest today is a multi-award-winning social entrepreneur, he is a singer, he has traveled the world, but luckily for me, the Corona, has him at home in Nigeria, Africa today and available to talk to me about a question, I get a lot from every African I know, do business with, and, many of the people I work with around the world,

Welcome, Ambassador Emmanuel Gabari to the show.
Let’s talk about it…